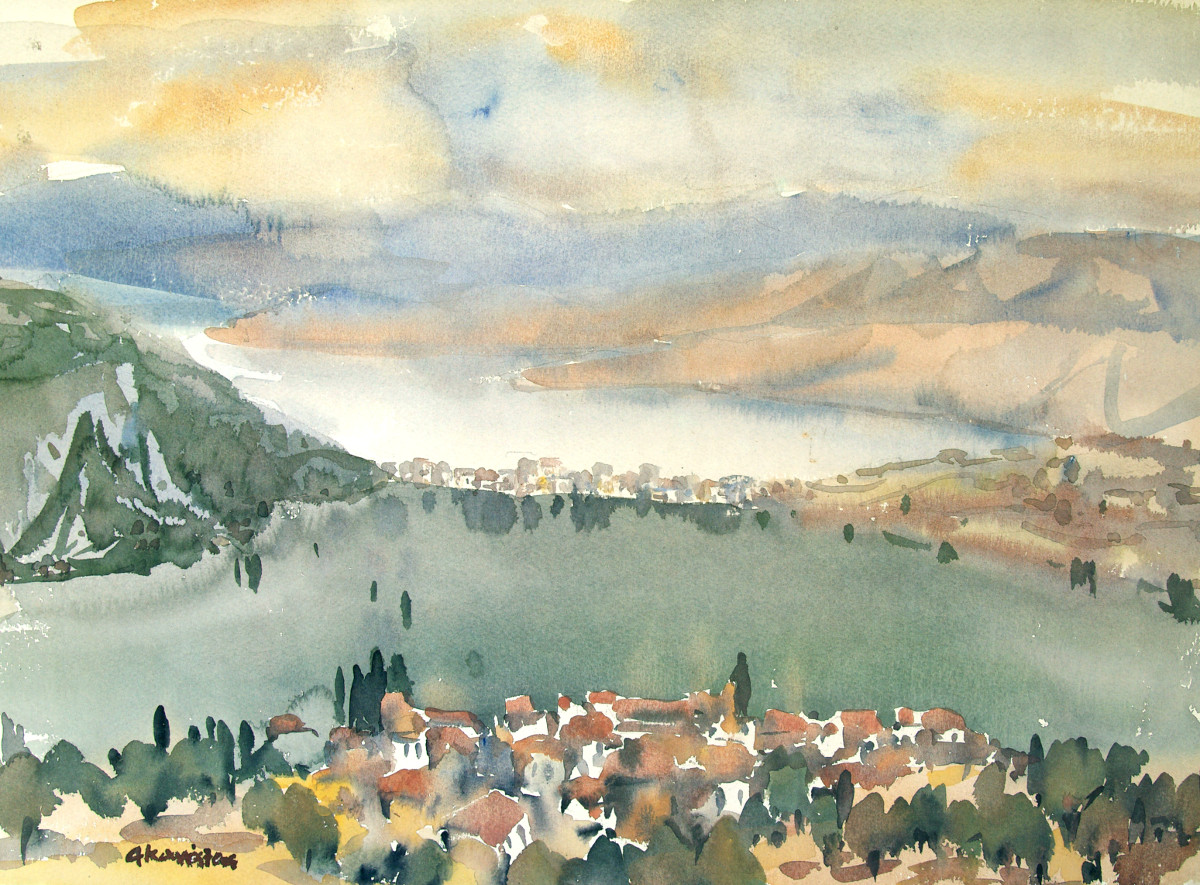 Nowhere else in the world do opposites like shadow and light, wild and tame, high and low, large and small coexist in such harmony or share their presence in such absolute fairness, as they do here on this piece of land. Complementing each other, they compose a landscape of aesthetic singularity. He who has cast his roots into this soil has also become a receptor of aesthetic messages as they are released by this splendid part of nature; and he has incomparably given of his best self, full of sensibility, connecting his works with this earth. Thus tradition has completed nature.
The Muses with the Nymphs had no trouble finding a place to live. All they had to do was to go up Mount Parnassus, as they and Apollo, too, have actually done. We are talking about Phokis, at the heart of Roumeli, where out of rough ground rise real colossi, the mountains of Parnassus, Ghiona and Vardousia; eternal guerilla-mothers that have bred hard-necked fighters, who at the difficult periods of the Greek nation would never bow down. Mountain masses that now furrow the area with their deep, sunless gorges, now fly to heights, striking the clouds sword-like with their pointed, hairless tops. Moreover, you will not know their grandeur until you have walked the Glogerorema, the Reka, the valley of River Mornos; or, until you have gazed down from Yerondovrahos, Belena, Angathia, Koraka and Liakoura. This may seem strange: but when you leave
Amfissa to go northwards, it is as if you had left behind the whole of the known world. You enter places that suddenly seem unexplored. Unwarned a traveller as you are, you will find yourself lost in an autumn mist crawling thick at the feet of the fir trees; or, thin, crowning the ridges; and you will stare at space with the same kind of feeling as you would have had if you were a fortunate explorer of old. After the mountains there are the shores... Lace-like hard land, emerging all fresh from the Gulf of Corinth, with its bare, well-designed ridges, it hugs the sea in deep bays. It descends steeply from high hills to the waves, from Ayios Minas down to Kirra, that ancient port of Delphi; then it expands for a while at the little modern town of Itea; and curves on to the neo-classic, frugal, distant Galaxidi; on to Vidavi, Kiseli and Erateini. With allgreen hills it goes past Douvia, past Hania, Sergoula, Marathia, Monastiraki, and vanishes, now level, towards Andirrion, leaving behind a few green traces, the most beautiful Trizonia. Between the mountains and the coast there are a few planes: Phokis of the winter-streams and rivers. It has the character and quality of the mountains whose part it used to be. And it has the abundant merits of a velvety delicacy and peace of silver-green olive-trees. You find them at the mouth of River Mornos, on the coast of Sergoula, Erateini, Kiseli and in the olive-plane of Amfissa.
Yet, no doubt, it is in Delphi that the ties of time are dissolved; the very gravity of this piece of land is counterbalanced as if by attraction from heaven. It is a divine area, that the mythical river Pleistos has carved out with its roaring downward rush, its eternal singing to this Apollonian creation. In this area, the soft horizontals of the most ancient olive-sea of Amfissa meet with the rough-hewn verticals of the Phaedriades Rocks and of Kirfi. Plain colours, simple forms, harmoniously following each other, provide the landscape with strong abstracting elements, stressing the Doricness of this excellent land. And if you happen to be gazing from the heights when the day fades, the winds drop into silence, and the light trickles from the finely wrought silver of the olive groves down to the mirror of the Krissaios Bay, you lose the sensation of difference in height and you gain the impression that if you were blown at you would fly...
In this book I have wanted to take the imprint of Phokis, as it is still tied to its past. My wandering pilgrimage within its historical space, has made of every step a deep, genuine contact with yesterday, with today. The personal expression of that contact is offered in this book, in the hope that it will have something to say about tomorrow, when tradition and technological progress, always in the service of man, and with respect for natural beauty - that eternal value will have created a new physiognomy on this piece of land.

If you have something to say on travels, you wonder about the words to use, and what to use first. Especially if you are only writing a short note like this one.
There is indeed a lively means of expression - the language of iridescent hues in the water-colour paintings, or of China-ink in the drawings brought back from every short or long journey. For travel, by offering excitement and causing a widening of experience, of profoundly human experience, is at the same time an important stimulant to creativity. In the first layer of many a work of art, there is perhaps only a journey, a transformation realized through "meditation and dreaming".
Yet travelling is both art and living. It gives the journey of our existence interest, charm, perhaps also difficulties and danger, while it makes it longer, as it also lengthens the voyage of return. And so I set sail.
Now plunging my brush into the humid air of La Loire, or into the morning dew of Brabant; now soaking the water-colour paper in the interminable drizzle of Alsatia; now moistening the blue evenings of Casablanca with water-colour and allowing the material itself to emphasize the austerity of Catalan earth or the snowed plains of Northern Europe. Thus, I completed the water-colours and the drawings that follow. But the journey continues.
It is hard, when you discover that, going past the Sirenes, there is no one who would tie you to a mast, so that you may not succumb to their charm. Or, at other times, when looking for a haven where to rest, you find that you are suddenly surrounded by Laestrigones. Yearning for a Nausika, you fall on a Kirke. But when you come across Kalypso, the storm ceases, everywhere there is calm, until a fair wind will blow your sails again for the return voyage to Ithaca.

Please send us an email at This email address is being protected from spambots. You need JavaScript enabled to view it.  with the code numbers of the Silk-screen Prints that you wish to order. Payment with VISA or Mastercard or Money transfer with post cheque.

Donations of the painter 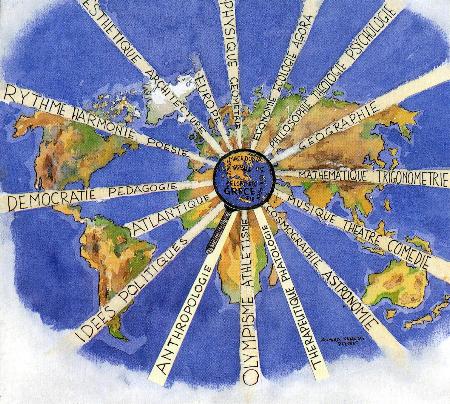 "Know Thyself" is a painting by Avyeris Kanatas. It demostrates the contribution of the Greek culture to the World's Culture Legacy. All the words - ideas that are the basis of the modern western culture are coming from Ancient Greece. The Greek words "Democracy", "Athletism", "Olympism", "Theater", "Politics", are spread to the edges of the earth like the rays of the Sun.

"Know Thyself" was given as a present to Mr. Jaque Santer, president of the European Community, in 1995 from the Mayor of  Delphi. A copy of it was given to all the deputies of the European Parliament. In the European Community there was a public discussion about the reduce of the official languages from 12 to 5. Greek language was about to be cut. With this painting the Mayor of Delphi tried to emphasize that the Greek language was very important for Europe. All the basic words that are used every day in all the other languages like "Democracy", "Politics", "Olympic games",.. have their origin in Greece.

Article of the Greek newspaper "Kathimerini" about "Know Thyself" (in Greek)

A permanent exhibition with the works of Avyeris Kanatas is in Delphi Camping in Delphi, Greece. It is consisted of many Aquallers from his various voyages around the world.